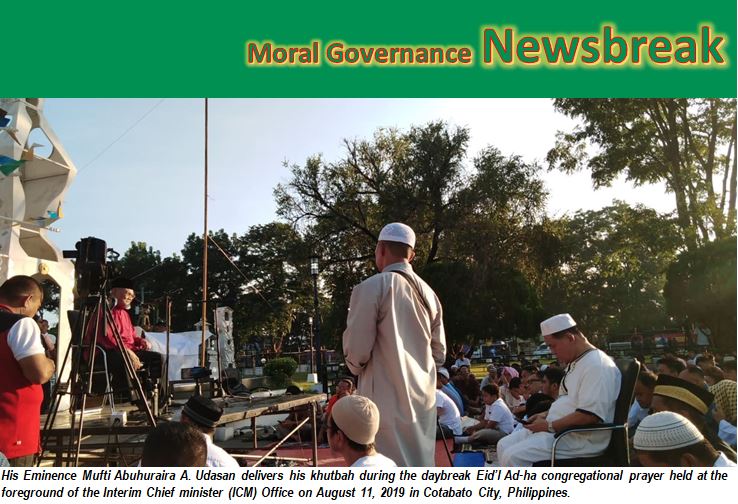 Cotabato City, Philippines, August 11, 2019 – As the dawn was breaking, thousands of Muslims flocked to the Interim Chief Minister (ICM) Office foreground to perform Eid’l Adha (Feast of Sacrifice) congregational prayer in the presence of His Excellency Ahod B. Ebrahim.

His Eminence Mufti Abuhuraira A. Udasan, Mufti of the Bangsamoro and Executive Director of Regional Darul-Ifta’ – Bangsamoro Autonomous Region in Muslim Mindanao (RDI-BARMM), was chosen as the khatib (the one who delivers sermon). In his khutbah (sermon), he pointed out some facets of moral governance in relation to the prophethood of Abraham (peace be upon him). He depicted that the moral governance of Prophet Abraham’s (peace be upon him) leadership is one admirable example.

1. Consultation and dialogue: The Mufti further emphasized the importance of consultation as vital ingredient of moral governance. He portrayed that when Allah tested and commanded Prophet Abraham to slaughter his only son Ismail, the Prophet still consulted his only son regarding his perception with the divine commandment.

Allah said in the Glorious Qur’an: And when he (Ismael) was old enough to go about and work with him, (one day) Abraham said to him: “My son, I see in my dream that I am slaughtering you. So consider (and tell me) what you think.” He (Ismael) said: “Do as you bidden. You will find me, if Allah wills, among the steadfast.” (Surah As-Saffat: 102).

So by Grace of Allah, Ismail was not slaughtered but instead it was interchanged with sheep (which now being practice by Muslims to slaughter lawful animal known as qurban or udh-hiya) during Eid’l Ad-ha commemoration.

The Mufti further portrayed consultation during the time of caliphate Umar. In one gathering, a Bedouin stood-up and voiced out his views in a harsh manner.  He was then  promptly restrained by the close-in followers of caliph Umar but Umar ordered his men not to do so. Instead, he let the Bedouin freely express his views because according to caliph Umar if the people will not be heard they are useless. Likewise, if the leader will not hear the views of the people then we are also ineffective, and would therefore have a useless governance altogether.

Allah said in the Glorious Qur’an: ‘And consult them in the matter. And when you have decided, then rely upon Allah. Indeed, Allah loves those who rely (upon Him)’ (Surah Al Imran: 159).

2. Inclusivity and unity: The Mufti quoted that ‘BARMM is an association and not isolation; accommodation and not marginalization; inclusive and not exclusive.’ He portrayed that Prophet Abraham (peace be upon him) had supplicated for Makkah to be the city of security, prosperity, harmony, peace and provision for Muslims in which Allah generously responded, ‘include also those who are non-Muslims as well’.

Allah said in the Glorious Qur’an: ‘And remember that Abraham prayed, “Lord, make this city a city of peace and security, and provide with every kind of fruit those of people, who believe in Allah and the Last Day”. Allah answered, “As for the disbelievers, I will also provide them with necessities of life in this world…” (Surah al Baqarah: 126).

The Mufti stressed the importance of unity in building BARMM regardless of faith, tribes and political affiliations. This can be realized though islamization in the oneness of Allah.

Allah said in the Glorious Qur’an: “And brought together their hearts. If you had spent all that is in the earth, you could not have brought their hearts together; but Allah brought them together. Indeed, He is Exalted in Might and Wise.” (Surah Al-Anfal: 63).

Allah also said in the Glorious Qur’an: ‘O Muslims, say to them, “We  believe in Allah and the Guidance which has been sent down to us and which was sent to Abraham, Ismail, Isaac and Jacob and his descendants and which was given by their Lord to Moses and Jesus (son of Maryam) and to all other Prophets.  We do not discriminate against any of them and we have completely surrendered to Allah as Muslims.” (Surah al-Baqarah: 136).

3. Devoid of defrauders and wrongdoers: Likewise, Mufti also upheld that every public service must be devoid of fraudulent acts or transgressors. He cited the covenant of Prophet Abraham (peace be upon him) to Allah when he was chosen as the leader of entire mankind.

Allah said in the Glorious Qur’an: “It is not for a Prophet to defraud; and whoever defrauds shall bring with him the fruits of his fraud on the Day of Resurrection, when every human being shall be paid in full what he has earned, and shall not be wronged” (Surah Al-Imran: 161).

Allah likewise said in the Glorious Qur’an: “Recall to mind that when his Lord put Abraham to test in certain things and he fulfilled all of them, He said, “I am going to make you the leader of mankind.” Abraham humbly asked, “Does this promise apply to my descendants also? He replied, “My promise does not apply to the wrongdoers ” (Surah Al Baqarah: 124).

With the moral governance shouldered on the Bangsamoro Darul-Ifta’ by the Office of the ICM, every office in BARMM is enjoined to swear-in the Oath of Moral Governance.

‘Stand Firm for Justice Even if it be Against Yourselves,’ Mufti Conveys

NDU Academe Interviews The Mufti Re: The Permissibility of Vaccinations

Jāmiat and Ifta to Collaborate on Education and Moral Governance 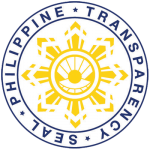