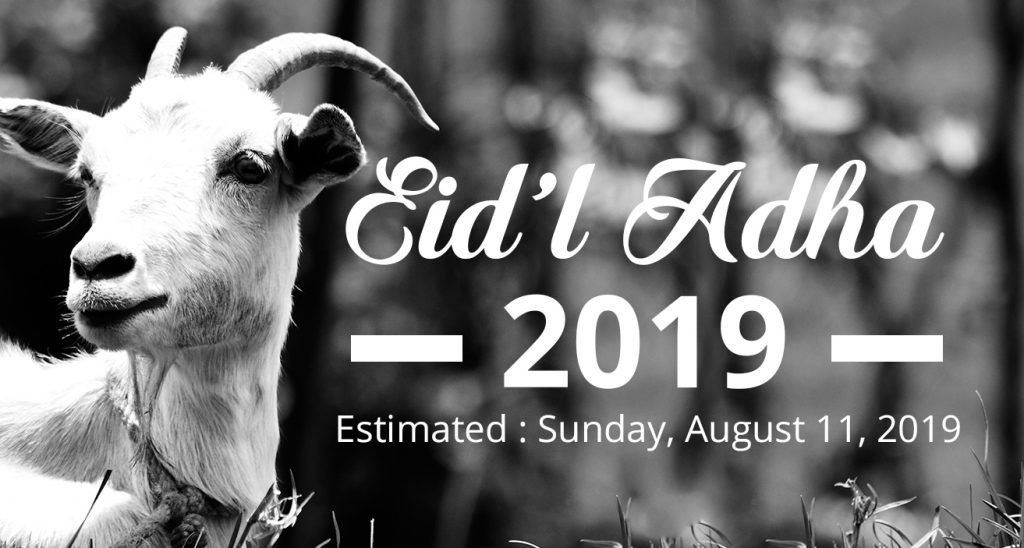 Eid al Adha 2019 or Qurbani 2019 will be celebrated on Monday, 12th of August 2019. This is the tentative date as the actual date is contingent on the sighting of the moon of Dhul Hijjah.

Eid ul Adha is a festival celebrated among Muslims all over the world in remembrance of the sacrifice that Prophet Ibrahim (AS) made out of his strong faith in Allah (SWT). Ibrahim (AS) showed a willingness to sacrifice his son Ismail (AS) but his son was replaced with a lamb by Allah (SWT). Allah (SWT) was so pleased with Ibrahim’s (AS) submission to Him that He made this demonstration of sacrifice and faith a permanent part of a Muslim’s life.

Hence, every year on the 10th of Dhul Hijjah, Muslims all over the world celebrate Eid ul Adha. On this day, Muslims slaughter a lamb, sheep, goat or a camel to honor the sacrifice of Ibrahim (AS). A sense of generosity and gratitude colors this festival.

This festival is meant to make a Muslim more virtuous in his or her deeds. It should not be meant only to offer sacrifices; rather it is meant to learn hidden lessons of freedom from selfish desires and to elevate a Muslim from anything that hinders his ability to fulfill his responsibilities as a Muslim. Allah says in the Quran:

“Their meat will not reach Allah, nor will their blood, but what reaches Him is piety from you. Thus have We subjected them to you that you may glorify Allah for that [to] which He has guided you; and give good tidings to the doers of good.” (Surah Hajj:37)

The first 10 days preceding Eid al Azha have great significance as they are meant to motivate and encourage Muslims for Eid. A Muslim must do maximum Ibadat in these days and then as an expression of reward, one celebrates Eid al Adha.